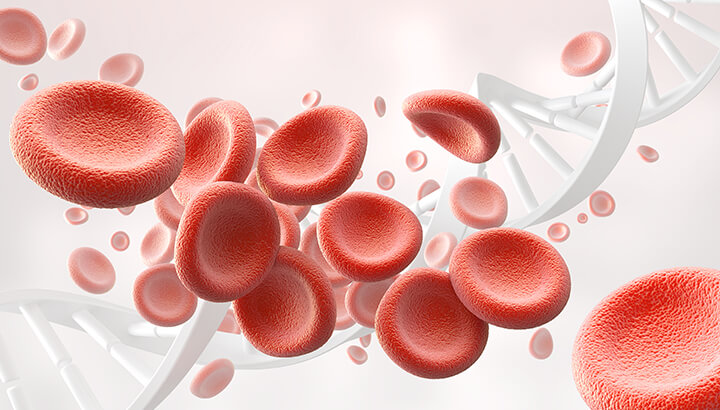 A brief about blood and its components

Blood is a connective tissue, which accounts for about 7 to 10 percent of the body weight. Apart from delivering nutrients and oxygen to cells and transporting waste from cells, it plays an important role in maintaining homeostasis and regulating the body’s systems.

It has four main components, as follows:

A blood disorder is an umbrella term for all problems that involve one or more components of the blood. While many of such disorders do not cause symptoms or affect life expectancy, others could be life-threatening. Anemia, thalassemia, thrombocytopenias, and idiopathic thrombocytopenic purpura (ITP) are some of the common blood disorders discussed below.

Anemia is a common blood disorder caused by a low number of red blood cells, and its worldwide prevalence is about 24.8%. Typically, anemia is a symptom of a condition rather than a disease itself. It could be caused due to nutritional deficiencies or arise because of other chronic or severe conditions. There are many types of anemia depending on how it occurs. Often, they are mild and treatable conditions, while others can be severe and life-threatening.

Anemia Symptoms: The symptoms of anemia may vary from person to person. In its mild state, anemia may not cause any symptoms. The severe state may cause symptoms, which may include:

The most common causes of anemia may include:

The diagnosis includes obtaining the medical and family history, followed by a physical examination to evaluate the overall health. Complete blood count (CBC) is the primary test recommended for patients with anemia, which provides information about the number of red blood cells along with their shape and size. Other tests may be recommended to identify the cause of anemia. Rarely, a bone marrow biopsy that involves obtaining a sample of bone marrow is recommended to look for defects that may lead to anemia.

The treatment for anemia varies according to the underlying cause. Typically, it involves recommending dietary modifications and medications to improve the red blood cell count. Other treatments may involve treating the underlying diseases causing anemia. Blood transfusions or bone marrow transplantation may be required to treat certain types of anemia.

Thalassemia is an inherited (passed from parents to children) blood disorder, where the body makes a lesser or abnormal form of hemoglobin. This leads to a shortage of red blood cells, depriving the cells of oxygen. It is estimated that about 1.5% of the global population are carriers of beta-thalassemia, with about 60,000 symptomatic individuals being born each year.

Hemoglobin, a protein that helps to carry oxygen in the blood is made of two subunits known as beta globulin and alpha globulin. The defects (mutations) in the genes that provide instructions for making respective subunits lead to reduced levels of alpha or beta globulins causing thalassemia.

Diagnostic tests may include blood tests such as a complete blood count to look for anemia and laboratory analysis of blood samples to detect abnormalities in the size and shape of red blood cells. Certain specific genetic mutations in the genes can be identified through mutational analysis. As thalassemia is an inherited condition, family genetic studies can help in the diagnosis of the condition.

The majority of people have mild thalassemia causing no symptoms and requiring no treatment. However, severe forms of thalassemia require regular blood transfusions, folic acid supplements, and spleen removal or bone marrow transplantations.

Thrombocytopenia is a condition in which the body does not produce enough platelets. It may occur as a side effect of certain medications or due to other conditions such as bone marrow or immune system disorders. It may not cause any symptoms in its mild form, but when the platelet counts are severely low, it may cause internal bleeding. It can be seen in both adults and children.

The signs and symptoms of thrombocytopenia may include:

Thrombocytopenia can occur due to many reasons. The common causes of the condition may include:


In rare cases, people with prostate or breast cancer may develop thrombocytopenia, as cancer spreads to the bone. People with spleen cancer may also develop the condition.

Diagnostic tests for thrombocytopenia include obtaining medical history and family history of the patient and history of the medications taken by the patient. During a physical exam, the skin may be examined for signs of bleeding, and the abdomen is palpated to check for enlargement of the liver or spleen. Blood tests such as complete blood count and clotting tests are ordered and specialized tests such as bone marrow biopsy are recommended to look for bone marrow abnormalities.

Treatment primarily involves treating the underlying disease or condition that is causing the thrombocytopenia. Blood transfusions may be required when the platelet count is severely low. In certain cases, the spleen may be removed to reduce further damage to the platelets.

ITP is a bleeding disorder caused by persistently low platelets in the blood. In adults, the annual incidence of ITP is approximately 66 cases per every 1,000,000 cases. In children, the incidence is about 50 cases per 1,000,000.

There are two forms of ITP- acute and chronic thrombocytopenic purpura. The acute form is often seen in young children may last less than six months and does not require any treatment. Chronic thrombocytopenic purpura is predominantly seen in adults and may last for at least six months. It has a higher chance to recur and requires regular follow-up care.

The symptoms of ITP may vary from person to person. The common symptoms may include:

In most cases, ITP is linked to an autoimmune response that attacks the body’s platelets by mistake, leading to low platelet counts. Certain viral or bacterial infections such as HIV, Helicobacter pylori, or hepatitis C may also lead to ITP. Especially, in children with short-term ITP, recent infections have been found to trigger immune reactions against platelets.

The diagnosis starts with obtaining a complete medical history and physical examination. Blood tests such as complete blood count to measure platelet numbers along with their size and maturity are recommended. Additional blood or urine tests are recommended to determine the possible cause of the condition. Rarely, bone marrow aspiration may be used to rule out other possible causes of the condition.