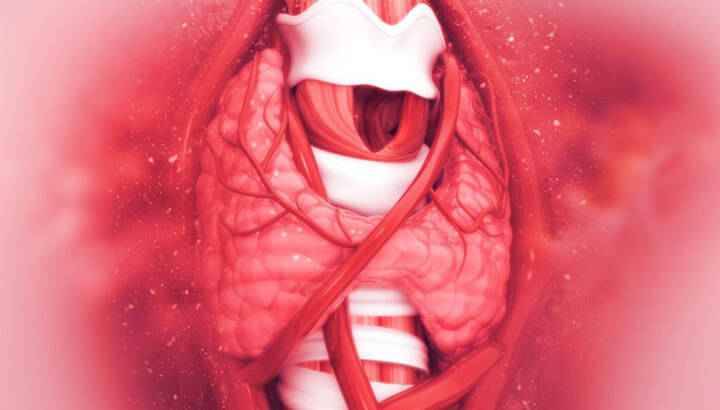 Larynx cancer is a type of head and neck cancer. It is the 9th most common type of cancer in India. In 2018, 28,721 new cases of larynx cancer were reported in India.

The larynx is the part between the base of the tongue and the trachea, which is made up of cartilages. It contains the vocal cords, which vibrate and produce sounds, and help to speak. The larynx also helps to breathe and swallow. There are three parts of the larynx- the upper part of the supraglottis, the middle part of the glottis, and the lower part of the subglottis.

Approximately 35% of laryngeal cancers begin in the supraglottis, 60% in the glottis, and only 5% in the subglottis.

Larynx cancer is a rare type of head and neck cancer, which occurs in the larynx or the voice box. Cancer is a rapid, uncontrollable growth of cells that causes damage to the body. Usually, laryngeal cancers occur in the squamous cells, the cells that line the inside of the larynx. In the later stages, cancer may spread to nearby tissues or organs such as the trachea, thyroid, esophagus, lymph nodes in the neck, upper part of the spinal column, and other parts of the body.

Some of the laryngeal cancer symptoms and signs are listed below:

The tests discussed below can help diagnose larynx cancer:

Physical exam: The neck is examined to check for any abnormal signs of larynx cancer. A gloved finger can be used to examine the insides of the mouth and throat.

Laryngoscopy: It is a procedure in which a thin, tube-like instrument with a light and a lens (laryngoscope) is inserted into the throat via the mouth. A tool may be used to remove the sample tissue, which is then examined under the microscope.

Biopsy: A small piece of the larynx is removed to be examined under the microscope.

Computed tomography (CT) scan: In this procedure, a series of cross-sectional images of the areas inside the body are produced using X-rays. In larynx cancer, it is done to determine the extent of cancer.

Magnetic resonance imaging (MRI): In this test, clear images of various parts of the body are obtained using radio waves, a large magnet, and a computer. An MRI scan is recommended when a CT scan is not able to provide all the necessary information about larynx cancer.

PET scan: In this method, a very small dose of a radioactive chemical is injected into a vein, which is absorbed by the organs and tissues. A scanner produces three-dimensional images from the energy released by the radioactive substance. This scan is recommended to get detailed cancer information.

Bone scan: This scan is recommended when any signs that cancer has spread to bones are noticed. In this procedure, a very small amount of a radioactive chemical is injected into a vein, which gets collected in the bones with cancer and can be detected by a scanner.

Barium swallow: This test is recommended to examine irregularities in different regions of the throat.

The following are the stages of larynx cancer:

There are different types of treatment available for patients with larynx cancer. These include radiation therapy, chemotherapy, or surgery. A combination of these methods can be used for appropriate patients. Doctors may suggest any clinical trial if it appears to be more promising than the before mentioned methods.

Chemotherapy involves the use of drugs to kill or slow the growth of cancer cells. When the drugs are given, they enter the bloodstream and reach the cancer cells throughout the body. These drugs are usually given intravenously.

Surgery can be recommended for all stages of larynx cancer. When performed in the early stage of cancer, surgery aims to take out cancer without removing the entire larynx and protect the major functions of the larynx. For advanced-stage cancers, the larynx is removed completely (laryngectomy).

Below are some of the surgical procedures used to treat larynx cancer. The most appropriate approach will be selected for each patient.


After the cancer is removed, some patients may be given radiation or chemotherapy to kill the remaining cancer cells (if any). These treatments can also be given to reduce the recurrence of cancer; it is called adjuvant therapy.

Immunotherapy involves using the patient's immune system to fight cancer. The substances produced by the body or made in the laboratory can direct, boost or restore the natural defense against cancer. For treating larynx cancer, immune checkpoint inhibitors such as nivolumab and pembrolizumab can be used.

The prognosis of a patient depends on the stage, location, size, and grade of the tumor, the patient’s age, gender, and general health. Cancers found in the early stage have a greater cure rate than those found in the late stage. Cancers that have invaded other areas of the body have a poor survival rate. After being diagnosed with larynx cancer, one must stop smoking, as it can improve the prognosis. Continuing to smoke after treatment can increase the risk of cancer recurrence, delay the healing process, worsen the side effects of the treatment, and prevent the patient’s voice from recovering completely.