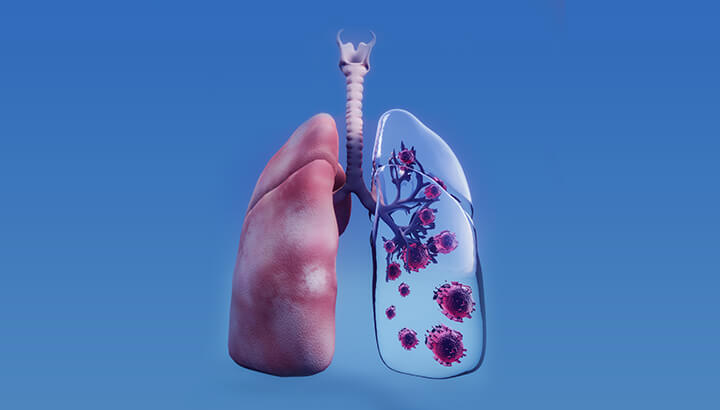 Cancer that begins in the lungs is known as lung cancer. It occurs when the cells in the lungs mutate and grow abnormally to form a mass of cells; these cells may or may not spread to the other parts of the body.

Lung cancer is the most common cancer and the leading cause of cancer death worldwide. In 2018, about 2.1 million lung cancer cases were estimated globally with 1.8 million deaths.

Based on how the cells appear under the microscope, lung cancer is divided into the following types:

Small cell lung cancer (SCLC): SCLC is aggressive cancer that accounts for 10-15% of all lung cancers. It is usually observed in heavy smokers and about 70% of cancers are at the advanced stages when diagnosed.

The symptoms of lung cancer may vary among individuals. Typically, they are not apparent during the earlier stages of cancer and may appear only during the advanced stage.

The signs and symptoms of lung cancer may include:

The exact cause of lung cancer is unknown. However, these risk factors increase the chance of developing lung cancer.

Chronic smokers, people aged above 55 years, and people who have a high risk of lung carcinoma must undergo yearly screening. Some lung cancers can be identified by screening, but the majority of them are only found when they start causing problems.

Following are the diagnostic tests that may be recommended to check for the presence of cancer or to rule out other conditions.

Medical history and physical examination: Details related to possible risk factors and symptoms are obtained. Physical examination is performed and involves the identification of possible signs of the presence of other health problems.


When lung carcinoma is suspected, more detailed tests are recommended and may include:


The cells obtained are sent for laboratory analysis that can provide information about the type of lung cancer. The extensive analysis also helps to determine specific characteristics of the cancer cells, thereby helping in the treatment plan.

Imaging tests are done to identify the presence of cancer and to check for the extent of cancer spread to other parts of the body (cancer staging).

Lung cancer treatment depends on many factors such as the type and extent of lung cancer, the patient’s general health, and his treatment preferences.

Surgery involves the removal of the tumor along with the margin of the surrounding healthy tissue. The surgery requires general anesthesia and is performed by making a large incision in the chest wall between the ribs. This procedure is known as thoracotomy.


During surgery, the lymph nodes may also be removed from the chest to check if cancer has spread to areas other than the lungs.

Stereotactic radiotherapy (SRT) is a type of radiation therapy that involves administering radiotherapy from many different angles around the body. People with small lung cancers who are not candidates for surgery can be treated with SRT. It may also be used to treat lung carcinoma that has spread to other parts of the body, including the brain.

Chemotherapy involves using anti-cancer drugs that are given either intravenously or orally to kill cancer cells. It is either used alone or in combination with radiation therapy. It can be used before the surgery to shrink the tumor or after the surgery to destroy the cancer cells that could be left behind. It may also help to relieve symptoms such as pain during advanced lung carcinoma.

Targeted drug treatments focus on specific changes within the cancer cells that help them grow, divide and spread. The featured advantage of targeted therapy is that it helps to specifically target the cancerous cells, thereby minimizing the damage to normal cells.

Immunotherapy triggers the immune system to control or eliminate cancer. It is often recommended for patients with locally advanced cancers and cancers that have spread to other parts of the body.

Lung carcinoma cannot be prevented; however, evidence suggests that the risk of lung cancer may be decreased by:

The survival rates vary depending on the extent of cancer spread at the time of diagnosis. An early diagnosis significantly improves the outcomes with timely therapeutic intervention. However, as lung cancer does not usually cause noticeable symptoms until advanced stages, the outlook for the condition is poor compared to other cancer types. About one in three people with this condition live for at least one year after they are diagnosed and about one in 20 people live for at least ten years.