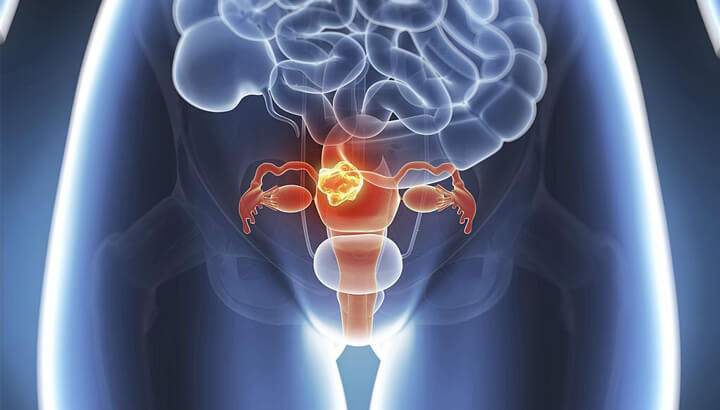 Moreover, it is the second most common gynecological cancer and is considered the fourth leading cause of death. The worldwide incidence rate for endometrial cancer is rapidly increasing, and it is estimated to increase by more than 50% by 2040.

Uncontrolled growth of cells in the innermost lining of the uterus (endometrium) is known as uterine/endometrial cancer. It refers to cancer that starts in the uterus and is different from the cancer of the uterine muscle (sarcoma). It is the most common type of cancer in the uterus. About 2-3% of women may develop it in their lifetime, especially during post-menopause.

The symptoms of endometrial cancer may include:

Other tests and procedures used to diagnose endometrial cancer include:

Ultrasound: During the transvaginal ultrasound, a probe is inserted into the vagina, which creates images of the uterus using high-energy sound. It helps in the treatment of thickened endometrium to analyze texture. It also enables checking for the presence of abnormalities related to the uterine lining and tumors.

Hysteroscopy: During hysteroscopy, a thin flexible tube with a light source, known as a hysteroscope is inserted into the vagina. It helps to examine the uterus and endometrium for abnormalities. Sometimes, an endometrial biopsy can also be performed during hysteroscopy, where a small tissue sample is obtained from the endometrium and sent for histological analysis. Local anesthesia may be given before the procedure to reduce pain or discomfort during the procedure.

Dilation & curettage (D&C): D&C is recommended when the sample procured during the endometrial biopsy is insufficient or if the biopsy results are unclear. D&C is usually performed as an outpatient procedure under local or general anesthesia. During the procedure, the opening of the cervix is dilated (widened) and a curette (spoon-shaped instrument) is used to scrape the tissue from the lining of the uterus and examined it under the microscope for abnormal cells. The histological studies help to confirm the diagnosis and provide details about the grade and type of endometrial cancer. When the cancer is suspected to have advanced to other body parts, further tests may be recommended that involve determining the extent of spread and cancer stage. They may include chest x-ray, computed tomography (CT), magnetic resonance imaging (MRI), and positron emission tomography (PET).

Depending on the size and spread of the tumor, endometrial cancer is classified into four stages.

The treatment plan and the long-term outlook depend on the cancer stage. Endometrial cancer is often diagnosed at an earlier stage due to persistent abnormal bleeding. With early diagnosis and prompt medical intervention, endometrial cancer can be treated easily with better outcomes.

The common types of treatments for endometrial cancer include:

Surgery is the most common treatment for endometrial cancer. It involves removing the uterus and other affected areas.

Radical hysterectomy: It involves the surgery to remove the entire uterus along with the immediate ligaments (parametrium and uterosacral ligaments) and the upper part of the vagina.

Surgeries that may be performed along with hysterectomy include:

Radiation therapy uses high-energy beams to destroy the cancer cells and can be delivered from outside the patient’s body, known as external beam radiation therapy. When the radiation is delivered through a radioactive source placed inside the vagina, it is called brachytherapy.

In some cases, radiation therapy may be recommended to reduce the chances of cancer recurrence after the surgery. It may also be administered before the surgery to shrink the tumor, enabling easy removal. Radiation therapy alone is also used as the treatment for patients who cannot undergo surgery.

Chemotherapy uses anti-cancer drugs to destroy cancer cells. Many chemotherapy drugs are available and often they are given in combinations. It can be received orally or intravenously, where the drugs enter the bloodstream and reach the cancer cells to destroy them (systemic chemotherapy). The drugs can also be placed directly in the body cavity to target the cancer cells in the affected area (regional chemotherapy). Sometimes, chemotherapy may be recommended after the surgery to decrease the risk of cancer recurrence or to shrink the size of the tumor before surgery. It is often used to treat advanced or recurrent endometrial cancers.

Hormone therapy involves changing the levels of certain hormones in the body. This could impact the cancer cells that depend on such hormones for their growth, thereby arresting their growth. During endometrial cancer, the hormones affected are estrogen and progesterone and the drugs that control these hormones help the cancer cells to shrink and die.

Immunotherapy helps boost the immune system to recognize and destroy cancer cells. It can be used to treat endometrial cancers that have spread to other parts or when other treatments fail to confer protection.

Endometrial cancer is not preventable; however, certain measures may help to reduce the risk. They include: