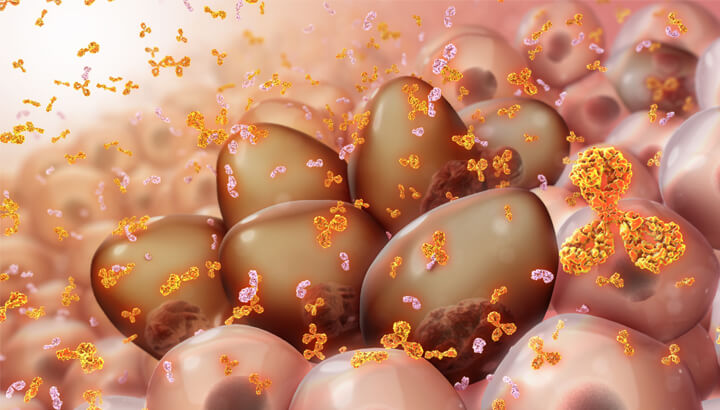 Multiple myeloma is the second most common blood cancer, with substantial morbidity and mortality. According to Globocan 2018, about 159,985 new cases were diagnosed, and the disease was responsible for 106, 105 deaths globally.

Multiple myeloma refers to the cancer of plasma cells, a type of white blood cell predominantly found in the bone marrow and lymph nodes. They secrete large quantities of proteins, known as antibodies, against pathogens or the toxins released by them.

Our immune system is made up of several types of cells that defend our body against potent pathogens. B cells are one of the subtypes of lymphocytes, a major type of white blood cell (WBCs). During an infection, the B cells differentiate into plasma cells that make antibodies to fight against pathogens. Plasma cells are predominantly found in the bone marrow, and soft tissue inside bones, acting as a source for red blood cells (RBC), white blood cells (WBC), and platelets.

During multiple myeloma, the plasma cells become cancerous and grow uncontrollably to build up in bone marrow and crowd out the healthy cells. These plasma cells make abnormal protein known as M protein, higher levels of which can lead to many complications. A high level of M protein in the blood is also noted as a hallmark of multiple myeloma.

Multiple myeloma is not limited to a specific bone or location within the bone but is likely to involve the entire skeleton. However, when only one single lesion occurs, it is known as plasmacytoma.

Multiple myeloma develops slowly, and the symptoms may not appear until later stages. The symptoms, when they occur may vary depending on the tumor location and the type of blood cells affected. These may include:

In many cases, multiple myeloma could be detected accidentally during routine blood or urine tests. In other cases, when any sign and symptom suggest multiple myeloma, the following tests or procedures may be used to confirm the diagnosis.

Blood tests: Blood tests are used to identify the blood cell counts, calcium and uric acid levels, M proteins, or other abnormal proteins like beta-2-microglobulin. Blood viscosity may be measured, as the blood may turn too thick due to the accumulation of excess protein. Measuring the levels of lactic dehydrogenase (LDH) may also help to evaluate the prognosis of the condition; high levels of LDH indicate advanced disease with a poor prognosis.

Urine tests: Urine samples are analyzed for the presence of M proteins that are referred to as Bence Jones proteins when detected in urine. However, routine urinalysis may not indicate the presence of Bence Jones proteinuria. Hence a 24-hour urinalysis (a sample of urine that has been collected over 24 hours), urine protein electrophoresis (UPEP), and urine immunofixation may be required.

Imaging tests: The following imaging tests can be used to reveal bone problems associated with multiple myeloma and to determine the extent of cancer spread.

The information obtained from the diagnostic tests is used to analyze the extent of the cancer spread. This process is known as staging. It helps to understand the outlook of the condition and work up the treatment plan.

The staging of multiple myeloma is based on the measurement of serum albumin and the levels of serum beta-2-microglobulin (β2-M).

The standard treatments options for multiple myeloma include:

Targeted therapy: Targeted therapy is rather a primary therapy used to treat all stages of multiple myeloma. The drugs in this class known as proteasome inhibitors block the action of proteasomes, which are substances that break down old proteins, eliminate them and replace them with new ones. This causes the accumulation of large amounts of protein leading to the death of cancer cells.


Immunomodulatory drugs: Immunotherapy drugs are used in the standard treatment of multiple myeloma. They act by strengthening the immune cells to fight against cancer cells and preventing the growth signals of the cancer cells, thereby directly killing the myeloma cells.

Radiation therapy: Radiation therapy involves using high-energy beams (X-rays or protons) to damage cancer cells and prevent their growth. It is used to treat specific cases of multiple myeloma or to reduce its complications. High doses of radiation along with chemotherapy may be used in the treatment of plasmacytomas, whereas, low doses may be used to relieve symptoms such as pain or to prevent bone fractures and spinal cord compression.