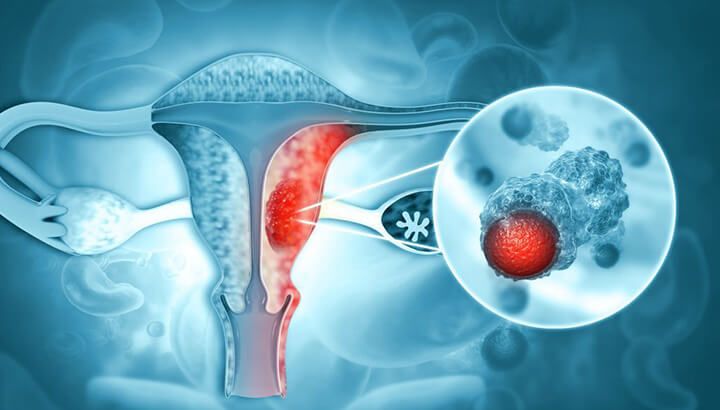 Ovarian cancer is one of the common female reproductive cancers. It is the seventh most diagnosed cancer and is one of the leading causes of cancer-associated female mortality in the world. According to the latest report of the National Cancer Registry Program (NCRP), ovarian cancers rank third after uterine and cervical cancers in Indian women. Even though ovarian cancer has a lower prevalence in comparison to breast cancer, it has the worst prognosis and is three times more fatal than breast cancer.

Ovaries are a pair of oval-shaped female reproductive organs that produce and release eggs (ovum) for reproduction. It is responsible for the production of female hormones, such as estrogen and progesterone.

Ovarian cancer is a disease caused by abnormal growth and division of cells in the ovary. Previously, ovarian cancers are believed to begin only in the ovaries, but recent studies showed that ovarian cancer can also begin in the part of the fallopian tube near an ovary and spread to the surface of the ovaries and beyond.

Ovaries are made of three kinds of cells and each type of these cells can develop into a different type of ovary tumor:

Ovarian cancers are often referred to as “silent killers” as there are no reliable signs and symptoms in the early stages of this disease. Most of the early symptoms of ovarian cancer are similar to that of other conditions, such as irritable bowel syndrome (IBS). However, if ovarian cancers cause symptoms, it includes:

Cancers usually develop when some abnormal cells in the ovary begin to multiply at an uncontrollable rate creating a mass of abnormal cells. Some of these tumors are benign (non-cancerous), while others may be malignant (cancerous).

The following factors may increase the risk of ovarian cancer:

Initially, the signs and symptoms, medical history, and family history of the patient are reviewed. If something suspicious is found, a pelvic examination is done. In addition to the complete pelvic examination, the following tests are often recommended to detect ovarian cancers:


However, for an accurate ovarian cancer diagnosis, the following tests are recommended.

The cancer staging is done by the TNM staging system. It provides detailed information about:


Ovarian cancers can have the following stages:

The treatment is based on the stage of ovarian cancer during the time of diagnosis and the general health of the patient. Treatment modalities for ovarian cancer include:

The common types of surgeries include:


Chemotherapy: It involves using drugs to destroy rapidly growing cancer cells in the body. These drugs interfere with the process of cell division and promote cancer cell death. For ovarian cancer, chemotherapy is administered as an initial treatment for more advanced ovarian cancer that cannot be removed surgically.

Chemo drugs are injected into a vein (IV) or given orally. In some cases, it is inserted directly into the abdominal cavity called intraperitoneal (IP) chemotherapy.

Targeted therapy: Targeted therapy involves the use of specific drugs to identify and destroy cancer without causing much damage to the normal cells.  It is recommended to prevent ovarian cancer recurrence or tumors that resist other treatments.

Hormone therapy: This therapy involves the use of hormones or hormone-blocking drugs to fight cancer. It mostly helps treat the stromal cell tumors.

There is no known way to prevent ovarian cancers. However, research has shown that the following factors may help in the prevention of ovarian cancer:

The outlook generally depends on the type of cancer and the stage of cancer at diagnosis and individual factors, such as age, overall health, and how your body responds to the treatment. The survival rate is more than 90% when the cancer is diagnosed in its early stages.