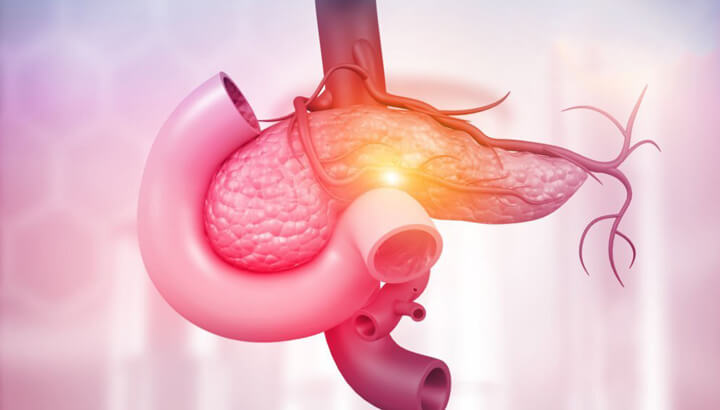 Pancreatic cancer refers to carcinoma that develops in the cells of the pancreas. It is ranked as the 12th most common cancer and is responsible for 7% of all cancer-related deaths in both men and women. As the patients seldom exhibit specific signs and symptoms until the advanced stage of the disease, it ranks as the 7th highest cause of cancer mortality in the world. The global prevalence rate of pancreatic carcinoma is 1 per 100, 000 people per year.

Pancreatic carcinomas arise when cells in the pancreas begin to grow and divide at an uncontrollable rate and form a mass called a tumor. Tumors can be benign (do not invade nearby tissues) or malignant (spread to other parts of the body).

As the pancreas is made of endocrine and exocrine cells, each type of these cells can give rise to a different type of tumor.


Signs and symptoms of pancreatic cancer

Pancreatic cancers often do not cause any signs or symptoms until it reaches the advanced stages of the disease.

Possible symptoms of pancreatic cancer include:

Pancreatic cancer is difficult to detect and diagnose as there may not be any noticeable signs or symptoms. The following tests are recommended for an accurate pancreatic cancer diagnosis if suspected of it:

Imaging tests: Tests such as computerized tomography (CT) scan, ultrasound, MRI, and PET scan are done to examine the suspicious area to learn how far cancer may have spread. Tests like angiography and cholangiopancreatography are performed to visualize the blood vessels and pancreatic ducts, respectively.

Biopsy: Biopsy involves inserting a specialized needle device guided by radio-imaging to remove a small amount of tumor tissue for detailed examination. There are mainly three types of biopsy based on the mode of insertion of the needle: percutaneous (through the skin) biopsy, endoscopic biopsy, and surgical biopsy.

The cancer staging is done using the TNM staging system. It provides detailed information about:


Based on the TNM staging, pancreatic cancer can be in any of the following stages:

If you have been diagnosed with pancreatic cancer, your cancer care team will discuss your treatment options and their possible risk and benefits.

Surgery:  Pancreas surgery is an appropriate treatment option for all pancreatic cancers as it completely removes the cancer cells and also increases the chances of long-term survival. Laparoscopy is recommended before the pancreatic cancer surgery, to help determine the extent of cancer and to check whether it can be surgically removed.


If the cancer is in advanced stages and cannot be removed, the following types of palliative (to improve quality of life) surgery may be recommended:

The side effects of radiation therapy may include mild skin reactions, fatigue, loss of appetite, nausea and vomiting, diarrhea, and weight loss.

Chemotherapy: It involves the use of drugs to kill or stop the growth of cancer cells.  The drugs are usually taken orally or injected into the vein or muscles. Pancreatic cancer chemotherapy is given with radiation therapy or after surgical procedures to enhance its effect.

Possible side effects of chemotherapy include nausea and vomiting, loss of appetite, hair loss, mouth sores, and diarrhea or constipation.

Targeted therapy: It involves the use of specific drugs to identify and destroy the specific cancer cells without harming the normal cells. The targeted drugs work differently from standard chemo drugs and offer minimal side effects.


Immunotherapy: Immunotherapy involves the use of substances derived from living organisms, which either recognize or attack cancer cells or boost the natural defense of the immune system. Immunotherapy can be used to treat pancreatic cancer is called checkpoint inhibitors.

Palliative care: It involves specialized medical care that focuses on providing relief from pain using pain medications and other physical symptoms, such as digestive issues, nutritional deficiencies, etc. which occur particularly in the advanced stages of cancer. It also offers emotional support for stress, anxiety, and depression.

There is no definite way to prevent pancreatic cancer. However, some lifestyle changes and maintaining general well-being may reduce your risk. It includes: